Memoirs of a Trainer- Walk your Path

When a trainer stands before the participants during a workshop, it is easy to read some few things about them from their facial expressions or body language. From the participant who is eager to be part of the workshop, to the bored one who appears like their only sole reason of attending the workshop was because their boss told them to and they already despise you the trainer even before you finalize your introductory paragraph. Then there is the fidgety participant, who doesn’t seem settled but is struggling to put forward a positive front.  This is only a snippet of what a trainer is expected to deal with throughout the workshop and ensure that somehow, sometimes miraculously we all finish the journey together. ( These traits are evident even in zoom meetings with slight variations). 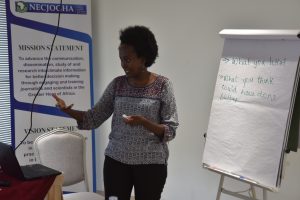 Through the course of the journey – learning together, a trainer observes that these various faces and body language, people categorize themselves into three groups by the second day of the workshop: those who grasp the content quickly (either because they already have the knowledge and are just merely re-practising it in session, the eager participant who is actively learning. Then there is the group that is in between. They have some knowledge on the issue you are aiming to train on but are not going the extra mile to do anything and are just content with the status quo of knowing what they know and not wanting to challenge themselves to embrace a different kind of thinking. Then there is the last group, who don’t know and don’t want anyone else to know that they don’t know. This latter group manifest themselves in different ways for instance fixing you with a cold stare when the trainer asks a question, intimidating other participants when they answer by trying to reflect them in a negative light, or by totally withdrawing away and look like they are not interested in the session at all yet, through their darting eyes you see a glimmer of pleading in their eyes: please help me!

One thing that keeps me working with all the participants is summed up by a lesson I learned one day when I was part of a group that went hiking to a certain hill. When we started off we were one excited mass of people, sharing some banter and walking with the people we knew. Soon it was time to move away from the main road to the footpath. At first the banter kept on with some even having the energy to yell to people from the front of the group to the back. Then the path started becoming steeper. The group slowly became silent as each one realized that there is need to preserve one’s breath as they climb. Soon the path became broad again and the banter continued. Then the next phase of the footpath loomed before us. This path was steep from the word go and maintained its tempo for about 15 minutes before one could get a three minutes rest before embarking  on another 20 minutes or so of steep climbing.

“My breathing became shorter and louder. My heart was beating like it was about to jump out of my body and my feet rejected the steep climb. I stopped severally and soon the other climbers passed me as if I was standing on one spot even when I thought I was making some progress. Several times I wanted to give up and turn back but when I resolved to do so then I would meet with someone who would tell me, “No don’t go back. Let’s keep going. We are about to get there.” They tried lurking behind to support me with the climb but my steps were too heavy and slow for them to stay with me and soon I would watch as their body forms disappeared in the next corner. Somehow I kept going. In my head I said if I can make it to the next resting place then I will be fine. Eventually I did make it to the summit. I was among the last one’s to arrive. This however did not dampen my spirit as I realized that I too had made it. It wasn’t about how many hours I took to reach there (I am sure the other climbers who arrived hours earlier noted) but I reached just like everyone else, at my own pace in my own style. Our journey to get there was not similar, as others almost speed walked to the summit, while others gained energy midway to the summit while initially they were struggling, while others got a lift by a passing vehicle and cut corners to get there.

When conducting a workshop, I look at participants based on their individuality. I always find time during group exercises or individual assignments to focus on the individual’s performance. For the one who needs encouragement, I give it to them. To the one who does not seem to understand and the session is over, I approach them quietly and ask if they have sometime at lunch time or at the end of the day where I can support them further. There are times when the participants reach out first before I do. In some cases, I find myself working with participants even after the workshop beyond my call of duty so as to ensure that they reach the point of understanding at their pace. And for those who are very quick to grasp content, I am often able to empower them to help someone else understand the content as I support someone else. In this way, most of the participants leave the workshop with a better understanding of the content. It is not about asking the participants if the workshop was successful, for me to capture it on an evaluation form but more of: “How did this workshop influence me.”