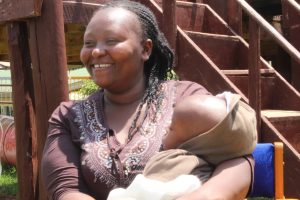 Jane Wanjiku is a mother to one-year old John. Each Friday, she forfeits going to work so that she can take the boy to therapy. The two hours are emotionally gruelling for Jane and excruciating for her son. Every week she has to watch her only son enduring the pain as the therapist stretches his limbs that are rigid.

John has cerebral palsy. He was born at seven months when Jane went into early labour. She was rushed to hospital, where she gave birth to her son. Barely a week later, they were back in hospital. John was not breastfeeding. He was diagnosed with jaundice, treated and discharged after 10 days, but six months later Jane became worried again, John was not meeting his milestones. His neck was not steady, and his body was stiff, with tight muscles. A doctor said he had rickets and prescribed medication. He did not improve.

Jane decided to take him to Kijabe hospital, where she was told her son had cerebral palsy.

“I was in shock, I had never heard of cerebral palsy, and I did not understand this,” she says.

Her first- and second-born daughters had been fine since birth. But now, her life changed. Besides having to forego one day’s pay every week to take John for occupational and physiotherapy, she was abandoned by some of her family and friends who thought that cerebral palsy was a contagious disease.

She managed to find an understanding nanny to take care of John when she goes to work, but even then, she is always preoccupied. She hates the stares she gets when she is out with John.

“It has been like this for the past one year,” Jane says, tears welling in her eyes. “But he is my only son” she adds, as she looks lovingly at John. “I am encouraged because John is slowly improving and my husband and other two children are supportive.”

According to the National Institute of Health (NIH) in the USA, cerebral palsy, is a leading cause of disability among children, results from damage to the brain or a brain malformation. Children with cerebral palsy are born with the condition, although some acquire it later. The main known causes of damage are infection in early pregnancy and lack of oxygen to the foetal brain. Some factors that increase the risk of brain damage include complicated or premature births, pregnancies that occur in women below 20 or over 40 years, multiple births and low birth weight.

The condition causes impaired movement associated with exaggerated reflexes, floppiness or rigidity of the limbs and trunk, abnormal posture, involuntary movements, unsteadiness of walking, or a combination of all of these. Children with cerebral palsy may have difficulty swallowing and commonly have eye muscle imbalance. A child with this condition needs to be attended to by a physiotherapist to help the child in movements of limbs and joints, an occupational therapist who will use play and activities like colouring to develop a child’s functional skills, an orthopaedic technician who will help in fabricating assistive devices that will aid positioning of the joints and limbs of the child so that they can walk and sit up like other children. If the brain damage has also affected sight and hearing, the child will need an eye and ear specialist.

Children with disabilities often are stigmatised. In many African cultures they are hidden and denied access to medical care, education, opportunities for social interaction and recognition.
“I am often heart broken when the mothers tell me that cerebral palsy is as a result of witchcraft or that the father was unfaithful in marriage,” says Egide Mbogo, a doctor who attends to children with cerebral palsy at Moi referral hospital in Voi, Taita Taveta County.

The Taita community in Voi believes that a child born with cerebral palsy is as a result of infidelity on the part of the father, what they call “Kuchira.” That’s why such children are hidden from the public. Children with cerebral palsy suffer emotionally as they are often a subject of ridicule from other children and they are not easily accepted in preschool as they are considered to be “too much work” by the school administrators.

Steve Muga, an occupational therapist at Feed the Children, notes that there is no cure for cerebral palsy, but he says, “Treatments such as physiotherapy and occupational therapy can help relieve symptoms and increase a child’s self-esteem and independence.” Unfortunately, therapy may be expensive and is not available to everyone who needs it in the country, especially those in the rural areas.

John is one of the few lucky children in Kenya who started therapy early. Many children suffer because diagnosis comes too late, or therapy is either too expensive or not accessible in their vicinity. But therapy can make a difference both for the children with cerebral palsy and their parent.

“I am encouraged when I come to the clinic and see other mothers with children like John who offer support to each other,” Jane Wanjiku says. “I know I am not alone, and John will be better than he is.”

Although there is no known cure for cerebral palsy, there are many research studies being conducted on stem cell treatment that so far is yielding positive response. The use of programmable robots to promote new brain connectivity and improve mobility is also being tested for treatment of cerebral palsy. The good news is that impairment caused by cerebral palsy is manageable. In other words, treatment, therapy, surgery, medications and assistive technology can help maximize independence, reduce barriers, increase inclusion and thus lead to an enhanced quality of life for a child with cerebral palsy.